The annual Naadam Festival held every July dates back seven centuries to 1300.  Equestrian Archery Wrestling–the three manly games. I’ve wanted to go there since I was a child, a half a century ago. I’ve always been smitten with both horses and archery. Wrestling? Well, I had to take out a rude boy or two occasionally, but they weren’t my poudest moments. 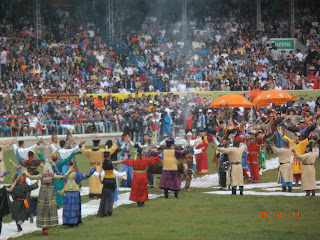 The Mongols were then, and are still the best in the world at these events. Highly skilled Mongolan archers on horses are the reason Genghis Khan and his ancestors built the largest land empire in human history- from the Sea of Japan to Turkey!

The opening ceremony for the Naadam felt mystical as Buddhists and Shamans together thanked their Gods and prayed for the safety and good fortune of their country and its people. As smoke from a giant bronze caldron rose to the heavens, the packed crowd reached out in reverence.

A parade of proud competitors: stunning women dressed in traditional costumes that their ancestors might have worn centuries ago, topped by hats that would make English royalty envious today, rotund wrestlers, handsome archers, and stately matched horses marched by the spectators  into the arena. Goose bumps rose on my skin.

Directly in front of us the wrestlers 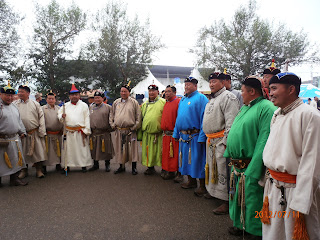 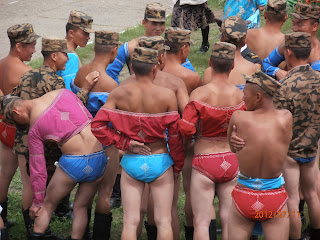 gathered, anxious for their time in the spotlight. Wrestling in Mongolia is not a performance farce as it is in the US. Suma wrestling takes years to master. Like Tai Chi, it’s about patience, balance and strength. A match only lasts a few minutes.

At the festival these huge men also wrestled with soldiers whose rippled muscles contrasted with their tight pink briefs and flouncy off the shoulder blouses. Although I asked, I never quite understood the point, but we hooted for the underdog, and watched amused as he struggled with his prodigious opponent.

The final contestants were two small boys with big aspirations. 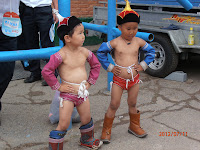 These future champions- pouring their heart and soul into the match-wrestled each other in earnest drawing much deserved adoration from the crowd.

The days before the festival I thought a lot about the great empire of Genghis Khan as my small group of six treked leisurely through Mongolia’s expansive countryside. How he had conquered so much in such a relatively short time,  how his massive army had traveled through the harsh environs of Siberia and the Gobi desert in huge caravans ruling fairly-allowing religious freedom and social equality, how he had spread his seed among more cultures than any other man in history. 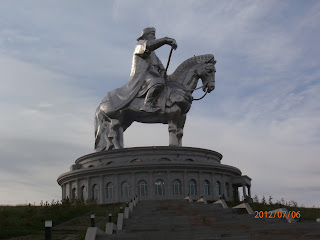 At one point on the steppe a lone rider, endurance training, whizzed by our small party at breakneck speed so fast that within seconds he was a mere pin point on the horizon. Dotting the landscape were camps of families in temporary gers and their horses. Most of them had traveled long distances to compete. 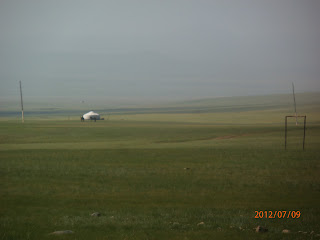 There are no fences to obstruct riders in Mongolia. Mongols are free to ride and set up camp where they wish. The land belongs to them.

Camped one evening at the foothills of Terelj National Park, we were eating the all too familiar mutton and rice dinner when two young boys, maybe six and eight sped by wearing only pants-barefoot on their ponies. Seeing a captive audience they showed off their rodeo tricks- swinging and dipping and standing up! while their ponies galloped along, still as skilled as their ancestors must have been.

Boys, and lately a few girls, begin racing the cross country event as young as age four. The younger the better because of their light weight. By the time they reach thirteen or fourteen many of them are too heavy for the endurance races. Two year old horses race for 10 miles, older ones up to seventeen!

‘The children race barefoot. Our guide explained that shoes are heavy and could hurt the horse if they are kicked, and the riders use light wool pony pads instead of leather saddles. Before the race the child-riders circle a shaman cairn three times while singing to their ponies- to give them luck, and to ward off bad spirits. 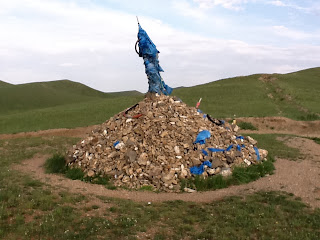 As the horses began returning to the finish line we saw several of them without their riders. I can only imagine how worried the mothers must have been watching their young children take off at a full gallop; having to wait hours for their safe return.

My favorite manly man event was horse archery. Far and away the most glamorous of all the competitors, dressed in stunning tunics of silk and satin brocade, they sat astride their handsome horses, relaxed and friendly, ready to rock and roll. 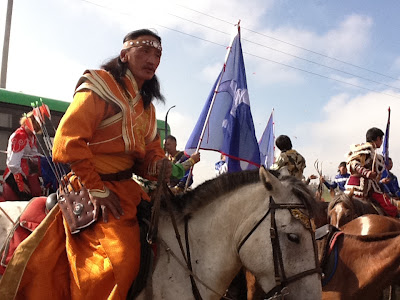 Their bows are still made as they were in ancient times using horn and sinew; the arrows finished off with the tail feathers of unlucky birds. 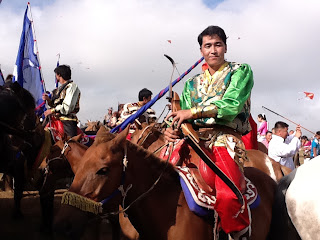 The crowd watched, spellbound, as the archers galloped full speed while removing arrows from the quiver, aiming and hitting the target -more often than not dead on the bulls eye. They didn’t just sit on the horse and ride by the target- like the boys we’d seen while camping, they were all over their horses, sometimes hidden along the side invisible to us.

All archery  is to beyold  the combination of  focus, strength, and precision, but watching the women archers I found myself holding my breath and occasionally felt the goosebumps again as they hit the target time after time. 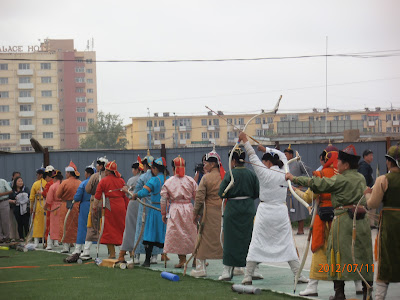 Examples of strength and fortitude-warrors all. Daughters and grandmothers, more than twenty of them formed a single row of skill to be rekoned with. Wearing colorful deels, the traditional caftan type gowns women and men have been wearing for centuries in Mongolia, they represented a variety of individual ethic groups and Mongolian cultures.  Some deels also indicate by color and design, the geographic area the woman’s family comes from. 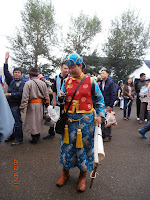 Above an expansive field filled with proud people and their horses whose ansestry boggles the mind in time and accomplishments, flew hundreds of kites soaring and swooping against a Robin egg blue sky. I was grateful to be there, to have shared just a minute in time with these legendary resilient people who were unfailingly gracious and welcoming to us. Fifty years. Worth waiting for. 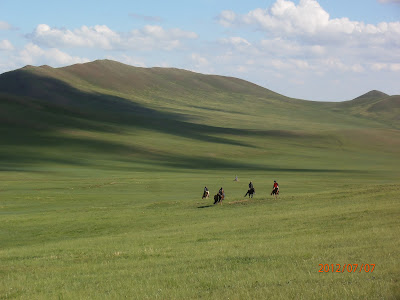