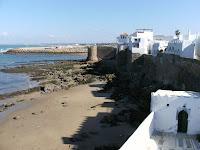 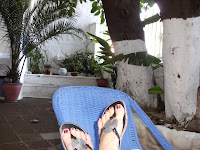 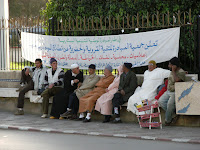 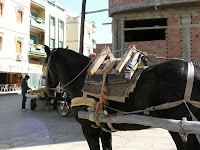 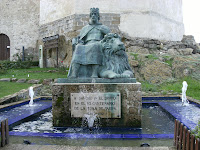 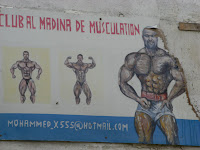 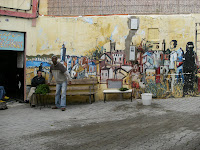 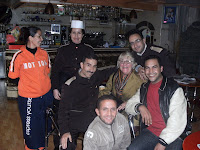 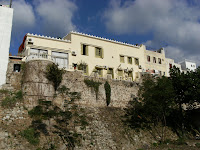 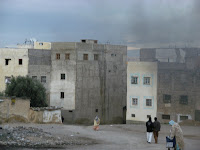 Cadiz, in the south of Spain, is a sweet old town. Said to be the oldest in Western civilization in continuous use. Don´t they always say that. Continuous use. So how many towns just lay down and die never to rise again. What I love most about Spain and now Morocco is that they have been conquered over and over again and it has only made the people more resilient, beautiful, and aware that one must live each day to the fullest.

Cadiz is vibrant in the evenings. I love to sit in one of the many plazas and watch the people. Whole families gather. Maybe they´ll have a cup of chocolate or an ice cream. Or just a stroll. My favorite place is in front of the cathedral. Yesterday I hung out over an hour with olives, jamon de espana y the ubiquitous vino tinto writing the stories of my childhood living above my grandpa°s bar in western Pennsylvania. I´m encouraged by my new friend, Robert, but writing about myself seems so audacious and egotistical in view of all the amazing stories we, each and everyone of us, has. At a cafe I met Brian, an Australian man who loved eating and drinking so we had a good night roaming the town trying out the tapas bars. Alas, he dumped me. He wanted to meet the following morning at 6 or some ungodly hour of the morning and I said noon would be better for me.

I took pictures of a young man and his frisky poodle puppy and some boys playing soccer on a riser of something that is being built but is now covered with a tarp. It´s about 5 feet high and they kept having to go over the side to get the ball. No problem. And students sitting on the steps with their computers in front of a cathedral that is centuries old really puts a spin on perspective. I especially love it when the bells ring to remind the catholics who is the boss of them. The church is quite dark inside and gloomy, the perfect place for Jesus to bleed on the cross for infinity. Cadiz is surrounded by a Roman wall that is hard to imagine them building wo electricity or a big crane. Now I see that building walls is what men did back then- before they had cars to work on.

Next I took the train to Tarifa, the southern most Spanish town on the mainland. When the bus pulled in it seemed as if I had landed into the eye of a hurricane. My umbrella lasted about a minute. I blindly fought the wind up the street and took a room at the first place I came to- the Hostel Dodi. It is an old building that still has its bidet and a tank above the toilet with the chain. It had a nice window and a double bed that I immediately napped in. This city is full of energetic surfers: wind, kite, and water. From here you can see Africa. Well, if the weather were clearer one could see it; I haven´t actually seen it yet. The Internet cafe that I write from is in The Center. You get to The center by walking thru a many centuries old arch that appears to have nothing to offer, but when you pass thru the ancient arch you are confronted by beautiful white buildings that seem to be one but are many set close together, with wrought iron balconies and hanging geraniums and very narrow passageways. Just enough for a slender burro and his cargo to get through.

My first day I had lunch with a young family: mom, dad and two boys ages 5 & 2, from London who had just come back from Morocco. He, Patrick, laughed when he said “one has to buy a rug, and one has to have a guide because if you have a guide the others leave you alone.” They also said the Rock was a mess-dirty and slummy so maybe I will pass on that. But still, I will have to fly to London from somewhere.

Next I took the ferry to Tangier, Morocco. By chance I found the internet cafe and believe me; writing is slow because the characters on the keyboard are in different places than I am used to and surrounded by Arabic characters that look like some ours but.. I°ll experiment. You just pretend it°s secret language only we know.

On the train here the woman sitting next to me had intricately hennaed hands and feet for her friends wedding. The train had individual compartments instead of a row of seats. There were five people in mine. Only one spoke English but they all wanted to know who will be our next president; McCain or Obama. Everyone I talk to asks me that question. They cannot believe McCain even has a chance and wonder how we got to be in such trouble? I say I don’t know; that I only have one vote and can only work so hard. Some have suggested I pray. I agree to because I think it sets good karma in motion.

I spent 2 nights in Tangier. It is a busy, complex city with an amazing history where you can see signs of the different nationalities that ruled, esp the Spanish & French- & English too a bit. I stayed at Riad Tanja, a former palace or home of a wealthy person of note and now a mid scale hotel. In Fes, Morocco, where I write from now I°m told riads always have a patio and a bitter orange tree.

From Tangier I took the train to Asilah, less than an hour south on the coast. Many people there speak Spanish & Portuguese and are very, sometimes too, friendly. The touts are annoying as hell but can be helpful too for a few dihrams ( 8 + in a dollar) they guide me to places I need like the lavenderia and stor to buy wine. As I rest I hear the men in the mosque praying. I’m not sure how often it happens but it is several times a day and they sound like braying donkeys thqt might be in pain. Thankfully it doesn’t last long. The guide I had yesterday in Fes said that if a person does°n have a good voice they should keep quiet because Allah doesn°t need to hear unpleasant sounds. I asked him if he had ever heard of Karoke? He had not. Cased closed.

In Asilah I went to a traditional hammam, the public bath house for a scrub & massage. Jesus. Mary. Joseph! The woman who led me naked except for panties thru three rooms of progressively hotter steam rooms packed wall to wall with Moroccan women and active children was a quasi=moto, sumo wrestler type with short legs, a round body, small round head with eyes that never smiled, and pendulous breasts the size & spirit of prize watermelons left to go soft in the fields.

She filled buckets with water then motioned for me lie on the tile floor. With a green brillo pad glove, she began on my chest. In round motions she scraped the first layer of epidermis from my body as if she were preparing a recently killed goat for tanning. For maybe a half hour she rolled & flopped me to suit herself, scraped even the tender parts of my under arms, jerked my panties up into the crevices of me ass and vulva and rid my body of skin I°ve had since I was six months in the womb. Every now and then she splashed me with a bowl of water from the bucket and took a rest apparently satisfied. This went on until I was ready to tell any truths she wanted to hear. And I paid for this! After, I went to my hotel room and read a murder mystery.

Now, because I am a person of impulse, I diverted my course and am in Fes instead of Rabat or Casablanca. Yesterday I toured the old Medina with a guide and spent too much money. But, Patrick was exactly right; you have to buy a rug and you need a guide so the rest leave you alone. Last night I had dinner at the home of Kalied, a man I met on the train. His sister prepared meat balls with camel meat. Of course with the 49 spices that he said make up the sauce it could have been any meat but it was delicious. All was well until I left and he wanted to kiss me °with passion because he is a divorced man and …° It is not dull here in Morocco and I take everything I ever said about being invisible back. I may take to wearing a caftan and a scarf. Kalied said he had plans for us. We would rent a car and drive into the countryside.. I called him and we have put off the wedding and intend instead to roam around other parts of Fes. I admit tho, it is nice to be referred to as °my sweet woman° or beautiful sweet woman°..
Today I walked in the rain.

At the Cafe Central a few hours ago a friendly waiter asked me to come in. I said, No, gracias.
As I was leaving an adorable boy ran up to me and took me by the arm back to the cafe. I never could refuse adorable boys. I was one of only 2 or3 customers in the place. We all hung out; waiters, bartender, cook. We talked religion, America, peace, food, and when Jahal asked me to adopt him, and I said it would make his own mom too sad, mothers=almost another perfect country song. Really this place is amazing. That°s us in the last pic before the battery gave out on my camera.