According to the U.S. Census Bureau, the number of persons in the US over 65 (officially elderly) has jumped by a factor of 11! in the past decade. We are growing by an average of 2.8 % annually. Well, our numbers are. Personally, I am shrinking faster than that. I have to hurry before I am too short to ride The Cyclone roller coaster in Coney Island.

Seniors make up the wealthiest niche market in the developed world. As travelers, they are said to want comfort, are cautious, safety oriented, demanding, and complaining. Additionally, they are quick to sue if anything goes awry. It makes sense.

A majority of these seniors live in gated communities, which comprises 10% of the US housing market. According to an article by Rich Benjamin in the New York Times, these communities “attract like-minded residents who seek shelter from outsiders and whose physical seclusion then worsens paranoid groupthink against outsiders.” In other words they distrust those beyond the pale. However, they have a staggering amount of money to spend, and the tourist market is working overtime to accommodate them.

Daily, buses full of middle class and upscale tourists from around the world clog the narrow streets of ancient cities forcing the residents to wait until they pass. Tourist companies pick and choose shops and restaurants that are ‘perceived safe’ for their clients. They are cautioned not to eat or drink from local street stands, or buy from unapproved merchants. God forbid they should go out alone at night. So, from their sheltered, cushy, climate controlled seats, perched high above the streets, these people observe the surroundings while being informed about it by the guide’s well rehearsed discourse. Later when relating their experiences at cocktail parties, they say, “Oh, yes. I’ve been there, I’ve seen that, or those people. It (or they) were charming, or quaint, or poor.”

The tourist industry is attracting like-minded physically secluded, tourists who seek shelter from the very places they tour. It’s crazy.

If you have the slightest inclination to step out a bit, to experience a different culture, or mingle with the locals, you have to get off the bus. Let that be your first adventure.

Adventure by definition means taking a risk, however small. Trust that people around the world are kind and curious. They want to know you, and are eager to share. As Rudyard Kipling said, “The first condition of understanding a foreign country is to smell it.” 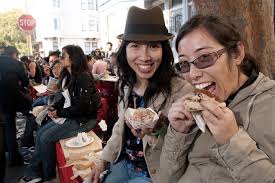