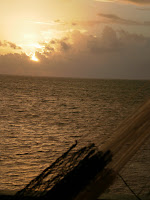 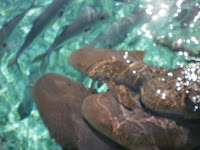 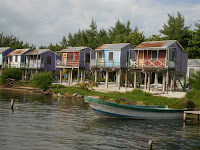 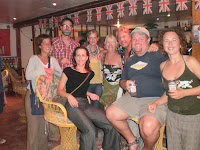 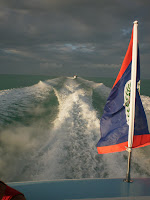 I write from my weathered shack-on-stilts, perched precariously on the water’s edge in Caye Calker, Belize. My shack is tri-hued: red front, purple sides and turquoise steps. Sitting on the porch with a rum drink I have the feeling I’m looking out from a postcard- not quite for real. The few mosquito bites I have on my arms and legs are reminders that I am though, and still tasty after all these years.

The third or fourth rain in the last 24 hours has turned the sky a steel gray, the color you might see on a well-heeled matron’s head. Of course what I love best about this weather is the lightening. If it ever hit me I’m sure I’d feel differently but so far that hasn’t been the case. So, thanks to my mom, I find it a fascinating show at a good price.

On the way here from Mexico our boat was stopped and searched at sea. It’s the first time I’ve seen an AK47 up close. They are ugly. Really ugly. I wouldn’t have known what they were but the guy I was sitting beside in the far stern of the boat pulled out a bottle of 5 year rum and offered me some while we watched the DEO officers go through the hatches, our luggage, and copy our passports. The search took about an hour. During that time the sun set, and several local gringos on board became angry. But, Dave and I were in no hurry. I took a couple of pictures of the coast guard boat chasing us and as they sat along side of us. One guy at the hostel said I could have been shot for such insolence but none of the three officers seem to mind; just another grandma with a camera. (Maybe the name of my next book.)

The highlight of Belize for me was the snorkeling. Imagine being IN a really big aquarium. I haven’t spent much of my life under water so I was amazed. I could have hung out for hours at just one spot watching the amazing variety of fish: all sizes, shapes, colors, and patterns do their thing. I was captivated by several schools of lovely little fish–maybe 3 to 8” in length, gray with yellow stripes and a bit of blue to set them off. They didn’t go anywhere, just hung out, swaying in perfect unison with the undulating water. We encountered turtles, a fairly large sting ray, barracudas, nurse sharks with babies swimming on the tops of their mom, (or maybe they were patients), and many more I can’t name, at least until I get somewhere and buy a book

My personal favorites were the bright red parrot fish that looked as though they were wearing plaid vests, and the moray eel that came out of its den when our guide knocked on the coral shelf in front of his door. That episode was a bit like a scene from a Grimms Fairy Tale. He, the eel, looked green to me and not at all happy that he’d been awakened-of course I don’t know what a happy moray looks like but who is ever is pleased to be called out of your house for nothing? Anyway, about 3 or 4 feet of him slithered slowly in a straight up out from his den while the rest of him stayed hidden. It reminded me of the cobras in the baskets of snake charmers that I’ve seen in movies. He looked us over and just as slowly and deliberately, eased himself backwards. The show was over.

One irritating notable about Caye Calkner is that the Chinese seem to have sunk their teeth firmly into this lovely spot of paradise. They own the stores, some restaurants and even have a Chinatown. They charge way too much in their stores while the Belizeians struggle to make ends meet.

On afternoon Jasmina and I decided to take a walk around the end of the island where the airport is built. When the land became so swampy our feet sank several inches we tried to cut through to the airport. We came upon a house and called out to see if we could get directions. A guy from inside yelled, “You need to go back. There are crocodiles in the swamp.” Oops. We watched for suspect logs along the way but got home safely.

I loved watching kids jump from the public pier into warm water & with nightfall came the aroma of spicy beans cooking in open pots to go with lobster and fish on the barbie. Yum